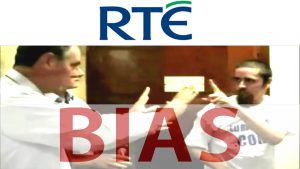 When RTE was a national broadcaster the station provided a reasonably balanced news output. In recent years, however, since the station began to serve government rather than citizens, news manipulation has taken precedence over factual reporting and professional analysis.

On yesterday’s Marian Finucane Show, for example, listeners were subjected to an intelligence insulting, extremely short, cartoon-like discussion on the disturbing events that occurred on North Frederick street during the week involving Gardai and housing protesters

Panelist: In fairness, Josephine Feehily and Drew Harris came out and said, no, that shouldn’t have happened.

Finucane: And yet and yet and yet..its tough on gardai. I thought it looked… I mean I was astonished at how it had come about.

Panelist: Look, there is an issue around social media , there’s no doubt about that, but look, we expect to see people in balaclava’s in the Basque country or dealing with the Real IRA or whatever. We don’t expect to see Gardai in balaclava’s policing genuine protests about housing.

I think the public were very, very upset about it and I’m thinking of something Theo Dorgan said once ‘I thought I was born into a republic’ and you see these private balaclava-clad guards arriving in a van.

But protesting has changed, I think the Gardai are very measured in the way they handle the physical and verbal abuse they get.

Then a panelist changed the subject by referring to a protest Finucane had participated in 48 years ago. Finucane, delighted at the diversion, went on to reminisce about another protest she attended in the last century – and that was it.

That was the sum total analysis of the disgraceful and disturbing events in North Frederick street where the Gardai behaved more like second-rate nightclub bouncers than a professional police force.

Clearly under pressure by her producer to keep discussion of this embarrassing Government/Gardai scandal to an absolute minimum Finucane, in a fluster, did as she was instructed.

Mmm…well…ah…I mean..we’ll move on very quickly. I think that deserves more conversation but I’m just watching my clock here and….

Watching her clock??? The discussion was taking place just half way through a two hour long show and this major public interest story gets a grand total of 1 minute 56 seconds coverage.

This is not news analysis, it’s blatant news manipulation. No doubt, Fine Gael and the Gardai are delighted with RTEs collaboration in this type of warped current affairs analysis.

But RTE cannot escape the fact that, day by day, its reputation as a professional and balanced current affairs outlet is reaching the same zero credibility rating as that of our police force.