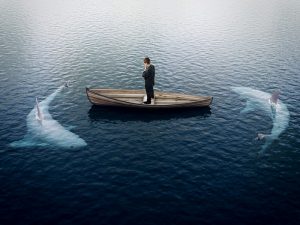 In December 2015 I wrote about how Stock Market sharks were moving in for the kill as a result of Denis O’Brien’s failure to float his Digicel company on the market.

Billionaires like O’Brien can incur instant poverty if they make a mistake in the shark infested market arena and it’s becoming increasingly clear that O’Brien’s massive debts are attracting the killer instincts of his fellow sharks.

Next Friday stock holders will decide whether or not to agree to a plan by O’Brien that would give the company two more years to deal with its massive $6 billion debt.

Now if only Denis had got his hands on Irish Water his problems would be over but a rebellion by Irish citizens put a stop to that possibility.

But wait, what about the billions to be made from rolling out broadband? Well feck it, somebody seems to have made a mess of that possibility too.

There’s just no justice for the super rich anymore.

Note to Fine Gael – must do better.